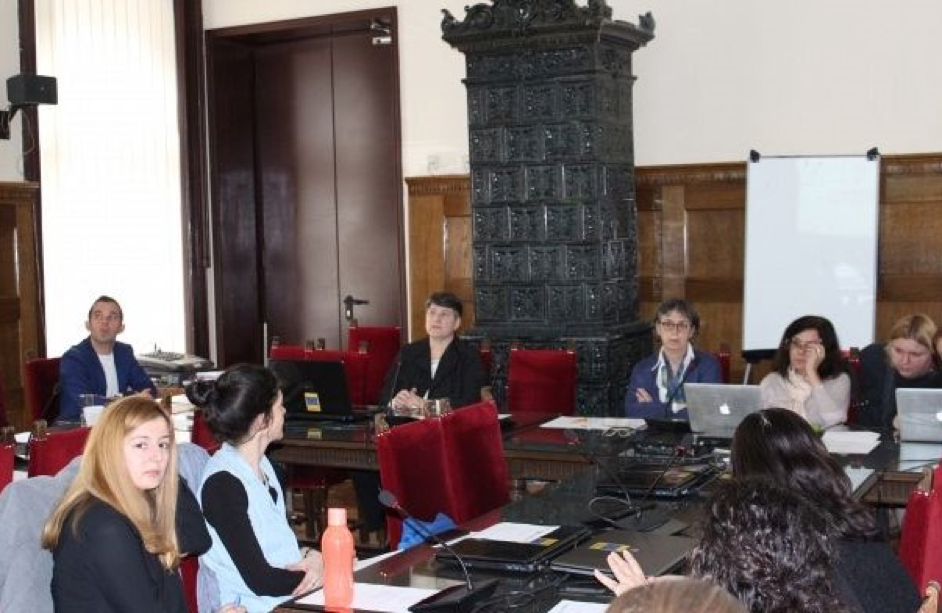 Main aims, data and preliminary findings. The project context and the main aims of the research were presented by the vice-rector, Prof. Ivanka Popovic. Representatives from the project partner organization from Barcelona, Spain, Maria Caprile and Rachel Palmen from the organization NOTUS, from Barcelona, Svetlana Kijevcanin from Helvetas, an organization that co-funded some of the research and also supported some complementary assessment processes, and Prof. Gordana Dasa Duhacek from the Center for Gender and Politics (Faculty of Political Sciences). The data collected and the preliminary research findings were presented by the vice-rector, along with Vladimir Markovic and Vladimir Mikic from the Rectorate.

Mapping gender equality. The self-assessment process conducted so far was aimed at mapping the existing state of gender equality at the University of Belgrade, at all levels: gender composition of the student population, human resources and decision making bodies, as well as an analysis of the University’s main policy documents from the gender perspective.

Some positive trends. Preliminary findings of the audit show that there are some positive trends regarding gender equality at the university level, as well as some worrying ones. When it comes to representation of women among the student population, the data shows that, overall, women make the majority of enrolled students at all levels of studies (Bachelor’s, Master and PhD). However, the audit has also shown that there is still a horizontal gender segregation when it comes to area of studies, due to scientific fields traditionally attributed to one gender or the other (technology and engineering as ‘male dominated’ disciplines vs. philology as a ‘female’ discipline).

Gender composition. When it comes to the gender composition of the University of Belgrade’s Teaching and Research Staff, the overall picture is generally very much balanced: the percentage of women, both fully and part-time employed, including all teaching and research positions, at all faculties of the University of Belgrade is around 48% (or 2354 women), while men make approximately around 52% percent (or 2564 men) of the overall teaching and research staff.

Gender segregated data collecting. The audit has also identified that there is a need for improving gender segregated data collecting when it comes to women’s participation in decision making bodies of the University. Despite the lack of systematically collected data, the audit has shown that women are under-represented almost in all relevant decision making bodies and there is room for improvement in this area. Lack of comprehensive data was also identified when it comes to gender equality in research content and curricula.

Improving gender equality. When it comes to analysis of main University documents and policies, several conclusions have been made: there is no systematic gender mainstreaming of University policy documents, there is no consistent use of terminology (i.e. some documents use the term “sex” and others “gender”) and there is no systematic use of gender sensitive language. These research outcomes will serve as a baseline and a basis for further developing the recommendations for improving gender equality at the University of Belgrade.

A fruitful discussion. The presentation was followed by a lively and fruitful discussion, mainly focused on the methodology of the research and potential recommendations related to the next phase of the analysis. Some of the suggestions (for example, the possibility of using the Unique Master Citizen Number, in order to collect the data on the average age of promotion to a certain academic rank for men and women) were noted and will be further taken up with the HR and legal services, as well as with the experts from the Computing Center, to see if and how some of the suggested methods could be used for further research and monitoring. Many present representatives of different faculties and institutes members of the University of Belgrade took part in the discussion and the cocktail that followed the event.

See you on June 1st. After the plenary session followed by the cocktail, a one on one meeting was held between the University of Belgrade and NOTUS representatives. During the meeting, the details of the GEA report were discussed, as well as the next steps of designing and adopting a Gender Equality Plan. The next Institutional Workshop was scheduled for June 1st.